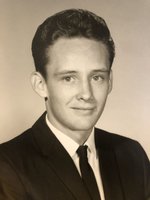 Robert Gerald Blaylock, 76, of Ridgeland, passed away on October 3, 2020 at Baptist Medical Center in Jackson, MS. He was born on December 3, 1943 to J.T. and Ruth Alldread Blaylock in Montgomery County, MS. Mr. Blaylock served in the US Army and US National Guard Reserve. He worked until retirement for Lucent Technology and was an installer of telecommunications equipment. He loved spending his days in retirement with his two grandchildren. Robert is survived by his daughter, Amanda Cook and Alan of Madison, MS; son, Steven Blaylock of Madison, MS; grandson, Drew Cook and granddaughter, Courtney Cook; sisters, Sarah Williams and Callie Briscoe; brother, Tommy Blaylock and sister-in-law, Carolyn Blaylock. In addition to his parents, Robert is preceded in death by his wife, Dian Blaylock; sister, Peggy Butler and brother, James Thomas Blaylock. Visitation will be held at Natchez Trace Funeral Home on Tuesday October 6, 2020 from 1:00pm until 2:00pm with a graveside service to follow at 2:00pm in Natchez Trace Memorial Park Cemetery. In lieu of flowers, memorials in his name may be made to The Wounded Warrior Project.