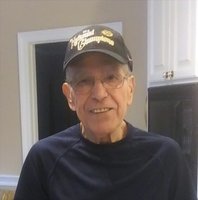 George Edwin Ferguson, 81, of Brandon, died Saturday December 26, 2020 at home after two years battling cancer. Born in Zwolle, LA. George served in the Air Force 1955 – 1959, when he enlisted at 16 years of age. He spent his career with Western Electric telephone company until his retirement with Lucent Technology phone company. He was a member of St. Paul Catholic Church, Flowood, MS and served on the board of RiverTrust Federal Credit Union. His greatest joy in life was his family and spending time with his grandchildren. George is survived by his loving wife of 61 years, Dorothy Jean Ferguson; daughters, Debbie Brown and Kristy Riley; sons Ben (Eddie) Ferguson and Stacy Ferguson; 11 grandchildren and 5 great grandchildren; 4 brothers, Maurice, John, Pat and Michael and his sister Molly Ferguson. He is preceded in death by 2 brothers James and Roland. A family graveside service will be held at Mississippi Veterans Memorial Cemetery, Newton, MS. The family requests that in lieu of flowers, memorials can be made in his name to St. Jude Children’s Hospital.