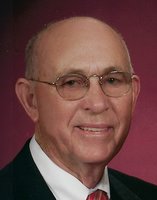 Horace McCormick (Mac) McMurphy, Age 91, of Madison, MS, passed away on January 7, 2021. Horace was born August 27, 1929 in Forest, MS, son of the late James Coley McMurphy and Elvy Elizabeth (McCormick) McMurphy. He graduated from Forest High School, attended East Central Junior College and graduated from Mississippi State University with a Bachelor of Science degree in Business Administration. After graduation from MSU, Horace enlisted into the United States Air Force and served his country during the Korean War. It was during this time, while stationed in San Antonio, Texas, he met his future wife, Ann Marie Lindeman. Upon leaving the military, Horace moved to Jackson, MS and entered the insurance industry and later established his own independent agency which he operated for many years. In 1956 Horace moved to Madison, MS, where he served as a town alderman and later as mayor for the City of Madison. Horace was also a longtime member and deacon at the First Baptist Church of Jackson, MS. Horace was preceded in death by his parents, his wife Ann Lindeman McMurphy, and adopted son, Michael Wayne McMurphy. He is survived by his son, James Martin McMurphy (Kay) of Elgin, South Carolina; grandchildren, Adriana McMurphy and Emily McMurphy, also of Elgin, SC; and brother, Hugh (Jonnie) of Olive Branch, MS. In lieu of flowers, memorials can be sent to the Co-Operative Ministry Program, First Baptist Church, Jackson, MS.