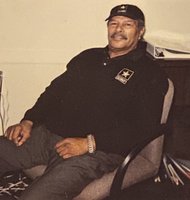 Carl Dennis Givens Sr. “Dennis” was born in Gary, Indiana. He was the oldest son of six children of the late Lonella Cunigan and Marzett Givens. Upon graduating from high school, he was immediately drafted into the U.S Army. He served as a combat medic during the Vietnam War Era and was referred to as “Doc”. Carl later retired as an LPN in Muechweiler, Germany Medical Clinic. He was a stellar employee, teacher, and coach. He also retired as a truck driver of the United States Postal Service. He was baptized later in life by Reverend Noah Alexander and fellowshipped with the late Civil Rights Leader Rev. Benjamin Hooks and the late Bishop G. E Patterson both of Memphis, TN. He leaves to mourn his wife Jennifer. During their union they had three sons, Karlin (Sheree) of Gluckstadt; Keevan and Kriston both of Madison. He also leaves his children; the eldest Derrick (Dominique); Darrin (Yolanda); Brian (Cheri); Dennis (Dorshonda); Dianechia (Terrell); Ajuretha; Aleshia (Marcus); Akira (Cliff); Carl Jr. (Melody); Denise; Desmond, Justin; thirty-four grandchildren and five great grandchildren. All that he loved dearly. He leaves to cherish his memories and childhood his only sister Betty (Larry); his brothers Chester (Lucy); Clarence (Betsy), Wade (Minell), Danny and a host of nieces and nephews. He fought a good fight, but God said, “Rest my faithful soldier “and beckoned him home”.