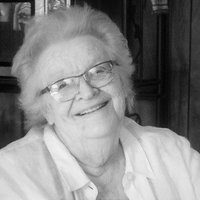 Hannelore Margarete Schoebel Hancock died on April 12, 2021 at the Martha Coker Greenhouses in Yazoo City, MS. She was born October 18, 1932 in Erlangen, Germany, the eldest of Richard and Therese Schoebel’s three daughters. She met her former husband, Lamar Hancock, while he served in the US Army in Erlangen. In 1965 she immigrated to his hometown of Bentonia, Mississippi, where she embraced her new home, raised her family, and continued to live there until her health declined in 2020. She was employed by E&W in Yazoo City and retired from Picadilly Cafeteria in Jackson. To her friends and neighbors she was known as “Miss Honey” and will be remembered for her strong will and determination, a feisty sense of humor and unending generosity. She was intelligent, well-read and possessed many talents; the gift she enjoyed sharing the most was cooking, always with her distinct “German flavor,” for family and friends. She is preceded in death by her parents, Richard and Therese Schoebel; her sisters, Helga Gast and Elisabeth Welss of Erlangen, Germany. She is survived by her children: Ursula Jones and husband, Jerry, of Madison, MS; Susi Mounts of Franklin, TN; Robert Schoebel and wife, Diane, of Ridgeland, MS and Steffen Hancock of Canton, MS. Her grandchildren: Markus Jones and wife, Jessica, of Northampton, MA; Rob and Audra Schoebel of Ocean Springs, MS; Slater Mounts and wife, Kristen, and Jakob Mounts of Bowling Green, KY; and John Edward and Kristen Ellis of Ridgeland. Her great-grand children: Autum Schoebel of Ocean Springs, MS; Easton Mounts of Bowling Green, KY and Charlie Jones of Northampton, MA. Arrangements will be handled by Natchez Trace Funeral Home. A celebration of life will be held at a later date.