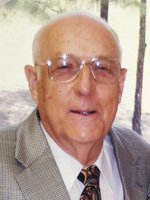 William Dunigan Pearl William Alton Dunigan, 87, passed away Saturday, April 24, 2021 at St. Dominic Hospital, Jackson, MS. William, or Bill, as most knew him, was born to Clennie Dunigan Perry and Guy Alton Dunigan on February 27, 1934, in Carthage, MS. He was a graduate of Edinburg High School and joined the military upon graduating. While serving in the military, he was stationed in several state-side bases as well as abroad. After being honorably discharged from the Air Force, he went to Hinds Junior College where he earned his Associates Degree in HVAC and Refrigeration. He worked at Armstrong Corporation, St. Dominic Hospital, and retired from the Veteran's Administration Hospital in 1993. Bill ended his military career by serving in the Air National Guard where he was deployed in support of Operation Desert Storm and was awarded the Air Force Achievement Medal for Meritorius Service upon retirement. Bill married the love of his life, Margaret Walters Dunigan on September 5, 1959. Bill would tell anyone that would listen that he knew he was going to marry Margaret after one date, but it took a little pursuing on his part. He never stopped pursuing her heart in the sixty-one years they had together. Bill was a member of Flowood Baptist Church where he faithfully attended until his health rendered his ability to drive. He was a deacon, Sunday School teacher, Discipleship Director and served in various roles of service in his 60 years of membership. He loved the Lord and never missed an opportunity to share the good news of Christ when given the chance. He enjoyed several mission trips building churches, which gave him much joy and fulfillment being apart of God's Kingdom work. Bill enjoyed gardening, fishing, hunting, stain-glass work and learning new skills. He had strong work ethics and never met a challenge he couldn't overcome. He taught his children and grandchildren to work hard, laugh loud, and most of all, to love God and people. His stories and laughter will be missed. He is survived by his beautiful wife, Margaret Dunigan of Pearl, MS; son, William Guy Dunigan (Anessa) of Madison, MS; daughter, Linda Dunigan Dismukes (Barry) of Kilmichael, MS; two grandchildren, Garrett Dismukes (Kelsey), and Alaina Dismukes; great-grandson, Charles A. Dismukes of Kilmichael, MS; sister, Annette Triggs (Glenn) of Canton, MS; stepbrother, C.B. Perry of Carthage, MS. Pallbearers will be Les Neal, Mike Pollard, Donnie Thomas, James Sorrells, Ray Hall, Steve New. Visitation will be from 12:00-1:45pm at Flowood Baptist Church on Wednesday, April 28, 2021. A Celebration of Life service will start at 2:00pm at the church. A funeral procession from the church to Natchez Trace Memorial Park Cemetery will follow. In Lieu of Flowers, memorials and donations may be made to Flowood Baptist Church Building Fund or The Wounded Warriors of MS at woundedwarriorsofms.com, or Wounded Warriors of MS, 1357 Wade Patrick Rd, Brandon, MS 39042.