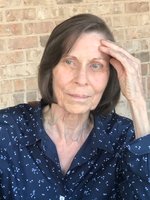 Bettie Carolyn Pierce, 82, former resident of Jackson and Brandon, MS passed away on July 15, 2021 at Hospice Ministries of Ridgeland. Bettie grew up in Magee, Mississippi, the daughter of SV and Mildred Jones. She attended Magee High School and worked in the family’s country store, with Bettie operating the cash register from an early age. She was, afterwards, a legal secretary at Wells, Wells, Marble and Hurst, Attorneys at Law for many years until her retirement in 2001. At home, Bettie was a devoted single mother to her two children. Later in life, she married Jan Pierce and they remained happily married for over 39 years. They enjoyed exploring the country in their RV, gardening, tackling home improvement projects, and taking care of their beloved dogs, Rosie, Bunny and Little Bit. They also loved to cook together and particularly enjoyed trying to recreate new dishes they had discovered during their travels. Bettie was an ardent reader, particularly of cookbooks, which she digested from cover to cover. She especially favored cookbooks with a historical or regional focus. Bettie is survived by her daughter and son and his partner; Patricia Roberts of Madison, MS, Charles Roberts and Lauren Wilton of Milford, MA; a step-daughter, Christina Pierce Parker of Pearl, MS; sisters Bonnie Allen of Ridgeland, MS, and Johnnie Hastings (Jim) of Hampstead, NC. The family would like to thank the following for their committed and gracious care of Bettie during her final 18 months; the Memory Care units at The Blake at Flowood and The Blake at Township, the compassionate staff at Saint Dominic Hospital (and particularly the ER, Six South and Five East), Home Health agencies Covenant Caregivers and Home Instead, and Hospice Ministries of Ridgeland. Much gratitude is due for the invaluable support the family received from the Broadmoor Baptist Alzheimer’s Support Group. A joint memorial service for both Bettie and Jan (who pre-deceased Bettie in December 2020) will be conducted at a later date; the public announcement of the date of the memorial will be forthcoming. Arrangements for the memorial service will be made through the Natchez Trace Funeral Home in Madison MS. In lieu of flowers, donations in Bettie’s memory may be made to Hospice Ministries of Ridgeland or to your local animal shelter.