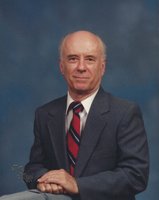 Ernest Harrison Jr. Madison Ernest Harrison Jr., age 91, passed away on August 4, 2021. He was born on August 8, 1929, to Ernest and Bernice Harrison in Jackson, MS. Ernie had a wonderful childhood filled with adventures, like sneaking to Hawkins Field to watch the B-17 bombers as they trained. The game was to get as close to the runway before the MP’s gave chase and to safely run back under the fence before capture. At an early age, He confessed Jesus Christ as his Savior. Ernie was an excellent student who studied at Central High in Jackson. He went on to study at Millsaps College. Ernie started attending Youth for Christ Meetings where he met the love of his life, Mary Jo. They enjoyed the next 71years together. During this time, Ernie recommitted his life to Christ and was baptized. Together, they served at Delta Drive Baptist Church were married. After they married, they headed to Baltimore where he worked for Bendix. A year and a half later, Ernie was drafted into the Army, where he served in a R&D unit. They then moved to Raleigh, NC. He was employed at Research Triangle Institute. While there, He received his doctorate in Biomedical Engineering from North Carolina State University. From there, Ernie, his wife and their 2 children, moved back home to Mississippi, and he started work with Mississippi Methodist Rehabilitation Center, using his skills to improve the quality of life for quad and paraplegics. After years of dedicated service, Ernie was promoted to CEO and was instrumental in starting several satellite Rehab Centers, called CORFs. Ernie was fortunate enough to enjoy 30 years of retirement, traveling with his wife to Europe on the QE2 and returning by freighter ship, just for the adventure. Alaska was probably where he experienced his fondest travel memories, while trekking down a wilderness river. Snow was falling that day and hundreds of eagles had gathered for the salmon run. He had waited his whole life for an experience such as this! The family joined him on many fun and exciting trips in the States, as well, in the “Good Times Van”. Recently, after suffering 2 strokes, his health quickly deteriorated at the age of 91. He was then cared for by the wonderful staff of St. Dominic’s for three weeks, and then he spent less than two days at Hospices Ministries of Ridgeland, whose Staff ministered comfort and care. Ernie passed away peacefully in his sleep, having lived a full and wonderful life. Ernest is survived by his wife, Mary Jo Harrison; son, Bart (Elthea) Harrison of Madison; daughter, Gale (Barry) Blinson of North Carolina; brother, Bobby (Virginia) Harrison of Madison; grandchildren, Mary (Matthew) Capper of Australia, Carly (Russ) Bowes of North Carolina; and great-grandchildren, Calen and Harper Bowes. He is preceded in passing by his parents. Visitation will be on Monday, August 9th from 1:30pm - 2:30pm at First Baptist Church of Madison. Memorial Service will begin at 2:30pm with an interment to follow at Natchez Trace Memorial Park Cemetery in Madison. In lieu of flowers, memorial gifts and donations may be made to Hospice Ministries of Ridgeland, 450 Towne Center Blvd, Ridgeland, MS 39157.