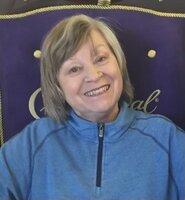 Elizabeth Ann “Liz” Robertson Frazier was born on December 15, 1941, and died on January 8, 2022, while surrounded by her family in her home in Jackson, Mississippi. Liz was born in North Hollywood, California, during a brownout. During her early childhood, she moved to Meridian, Mississippi, where she eventually met the love of her life, Gerald “Jerry” Bennett Frazier, whom she was married to for 62 years. Liz was preceded in death by her beloved Grampa and Gramma, Robert Peter and Agnes Russell Anderson Stephen, her parents, Charles and Margaret Robertson, her sister Kathleen “Kathy” Bittel (Bob), and two young sons, Gerald Bryan and Jerry Stephen. She leaves behind her husband, Jerry, her son, J. Tyson Frazier, and two daughters, Rachel Frazier and Amanda F. Adams (Kelly). Additionally, she leaves behind her brothers, John “Johnny” Robertson (Ann) and Charles “Skip” Robertson (Barbara), 8 grandchildren – Evan and Graham Adams, Clara Margaret, Iain Frazier, Mary Abigail, Lottie, Flynt, & Harry Bankson, and 10 nieces and nephews. Her grandchildren brought her endless joy. She treasured spoiling every one of them and valued every minute that she was able to spend with each one. Liz was devoted to her family from an early age. Her brother Skip fondly recalls a time when he was just 5 years old and very sad that he wasn’t allowed to play football with the big boys. Liz stopped her activities to play records on a little turntable with him – an act of kindness that meant the world to him and was very typical for her. Her brother Johnny recalls a time when she was 15 and her parents went to a see a specialist at a hospital in New Orleans. Upon learning that her father would be having surgery, she took the train to New Orleans (without parental permission) and went to the hospital so that her mother wouldn’t be alone in the waiting room. She was always putting the needs of the family before her own. Liz loved traveling. She often spoke fondly of her childhood family trips to the Smoky Mountains and California. She loved all her vacations with her husband and children. Her favorite trip was to Scotland in 2009 with her brother, Skip, sister, Kathy, and their spouses. She had the time of her life. Liz loved tending to her vegetable and flower gardens; she especially enjoyed growing orchids. She enjoyed sitting on her back porch with her beloved dog, Koko, while having her daily devotional and watching the birds. She held several jobs over the years. While Jerry attended Ole Miss, she worked in the registrar’s office. While living in Gulfport, she taught Preschool at the First Presbyterian Church and later became a real estate agent. In April of 2021, she retired from being the secretary at Woodland Presbyterian Church in Hattiesburg, MS. Because of her profound faith, Liz strived to be the hands and feet of Jesus. Her concern for those who needed a fresh start, lead her to establish The Way Inn Ministry; an outreach ministry for homeless women who had just been released from prison. She treasured the women who were part of the ministry and many of the women referred to her as “Mama Liz”. She especially enjoyed meeting with them for weekly Bible Studies to share the love of Christ. Liz was the cornerstone for her family and will be greatly missed, but will also always be celebrated with smiles, laughter, and tears by her friends and family who loved her. Liz loved well. The family wishes to thank the sitter, Caroline, who showed so much love and care for Liz in her final weeks. The family also wishes to thank all of the many people who prayed, called, texted, sent food, offered help, and showed love over the past few months. Due to COVID, the family will have a small, private ceremony. In lieu of flowers, please send donations to United Christian Academy, 3901 Lincoln Road, Hattiesburg, MS 39402.