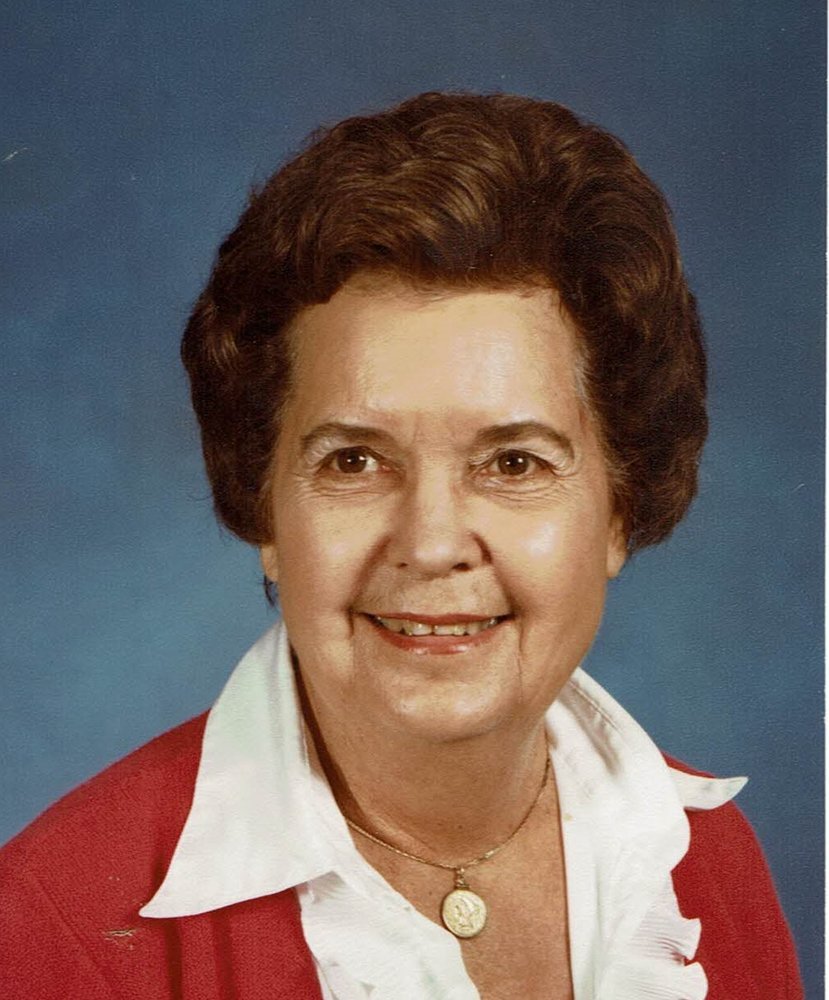 Please share a memory of Jessie to include in a keepsake book for family and friends.
View Tribute Book
JESSIE ANNA HODGES PURYEAR Jessie Anna Hodges Puryear passed from this life on May 22, 2021 at St. Catherine’s Village in Madison, Ms. On February 5th, 1918, Mr. and Mrs. Fred Barry Hodges of Wesson, Mississippi welcomed their fourth child, a dark haired, brown eyed beauty, who they named Jessie Anna. Jessie Anna was a true middle child, (she already had three other siblings and her parents went on to have three more after her). Throughout all her 103 years she has lived up to that title—she was always in the middle of everything! She spent her childhood in Wesson, graduated from Copiah Lincoln High School, followed by Copiah Lincoln Junior College, and then continued her studies at MSCW, graduating in 1940 with a bachelor’s degree. Equipped with a good education, she embarked on a career in teaching, history being her subject of choice. She began her first teaching job in Sardis MS., before moving on to a new job in Senatobia, MS. in the fall of 1942. The job that was available at the time was for a band director. Jessie Anna was a history teacher and had limited musical talent, but her Mother promptly told the school administrator that she would take the job. With that settled she became the band director and taught some history classes as well. She learned how to play every single instrument in the band and took her marching band all over the south marching in parades and local events as well. Each year her band marched in the Cotton Carnival Parade in Memphis and won superiors each year, quite an accomplishment for a history teacher! Jessie Anna continued to live and teach in Senatobia for the next nine years, where she attracted the eye of a young local resident by the name of Frank Edward Puryear and after a wonderful courtship, he asked her to marry him. They were married in July 1951 and settled into their new life as husband and wife in Senatobia for the next 44 years. In 1953, they welcomed their first child, a daughter named Sallie into the world. Their second child, a son named Frank, Jr. was born in 1959. After her children became school age, Jessie Anna returned to teaching at Senatobia City School and then later taught at Magnolia Heights School in Senatobia for 10 years before retiring. Jessie Anna was active in the Cosmopolitan Club for over 50 years, including a term where she served as President. She also worked with the Friends of the Library Association. She and her husband, Frank were faithful Mississippi State Bulldog fans, attending many games and cheering for their Bulldogs. After losing her husband in 1995, she continued to live in Senatobia until 2006. She then made the decision to move to St. Catherine’s Village to be near her daughter and her husband. She was a resident of St. Catherine’s Village for 15 years. Once she moved in, she set about making new friends and renewing old friendships. Jessie Anna continued to remain active by beautifying the Marian Hall garden courtyard with seasonal flowers and decorations, joining the library committee at St. Catherine’s, and attending the water exercise classes in the pool; she was even the instructor for many years! Our family would like to extend their heartfelt gratitude and appreciation to the staff and employees of St. Catherine’s’ Village, all of whom have lovingly cared for her all these years. Jessie Anna was a member of the Senatobia First United Methodist Church for over 50 years. When she moved to St. Catherine’s she attended Briarwood United Methodist Church. Jessie Anna is predeceased by her loving husband of 44 years, Frank Edward Puryear Sr., her parents Fred Barry Hodges and Frances Graham Hodges, Sisters Frances Brown, Lucille Bennett, Brothers Dr. Fred Hodges, Rev. Graham Hodges, Dr. Lucien Hodges, and Jimmy Hodges. She is survived by her daughter Sallie Kaufmann (Karl) and her son Frank Edward Puryear, Jr. both of Brandon, MS. Survivors also include her granddaughter Julia Lamb Kelly (Chad) and two great grandchildren, Sallie Baylee Elise Kelly, and Cole Madison Kelly all of Independence, MS. She was affectionately known as “GG” by her great grandchildren, and she took great pride in their accomplishments. Jessie Anna is also survived by numerous nieces and nephews scattered across the country. One niece, Julia Hodges of Madison, MS. was very special to her, having helped care for her over the last 15 years. She is also survived by her cousin and lifelong friend, Kathryn Gabbert of Senatobia, MS. Jessie Anna enjoyed a wonderful, active, fulfilling life with family and friends by being in the middle of it all for 103 years! Visitation will be at the First United Methodist Church in Senatobia, MS. on June 12, 2021 in the fellowship hall from 9:30 am – 11:00 am. A memorial service and celebration of life will follow in the church sanctuary at 11:00 am. Family graveside interment of ashes to follow at Bethesda Cemetery, Senatobia, MS. Memorials can be made in Jessie Anna’s memory to First United Methodist Church, 102 West Gilmore Street, Senatobia, MS. 38668 or Magnolia Heights School, 1 Chiefs Drive, Senatobia, MS. 38668 or St. Catherine’s Village, 200 Dominican Drive, Madison, MS. 39110

Share Your Memory of
Jessie
Upload Your Memory View All Memories
Be the first to upload a memory!
Share A Memory
Send Flowers
Plant a Tree