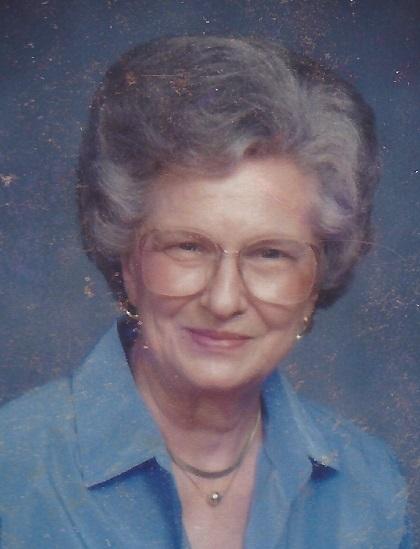 Ann ( Jackson ) Lenz-Higbee ( 94 ) left this world to go to her Heavenly home on May 7, 2017. Ann was the youngest of three children born to Clemmie Keating Jackson and Elisha Andrew Jackson in Sardis MS on October 30, 1922. Preceding her in death were her parents, her nephew Ray Butler , her sister Dorothy Butler , her brother in law Morrie Butler, and her brother Ed Jackson that died serving his country in WW II. After graduation from high school and the College of Business, Ann accepted employment with MS Power and Light in Sardis and later accepted a position at MP& L in Jackson. After exhibiting exceptional skills in organization and writing, Ann was, once again, made an offer to be employed as the Executive Secretary of Mr. Featherston, the Vice President of MS Valley Gas. Her position at MS Valley Gas became her lifelong career. A time when many women stayed home to raise children Ann dressed to the“nines “ in her designer suits and high heel shoes and took great pride in being a career woman. She was recognized for many accomplishments associated with her writing ability, she was President of Executive Women’s International and received awards throughout the years too numerous to name. She was married to first husband Eddie Lenz for 35 years during which time they had great fun entertaining friends, boating at the Rez and traveling in their camper. Ann was a devoted wife who cared for Eddie during his last few years as he suffered from Alzheimer’s disease. After retirement Ann, always the adventurer, packed up, moved from Jackson and headed to Olympia National Park in Oregon, it was there that she met and married her 2nd husband Lloyd Higbee. They took up residence in Bandon Oregon but loved traveling the country in their RV. They stayed months on end in the likes of Yosemite National Park, The Grand Tetons, Canada and anywhere else they found to be interesting along the way. She loved the simplest things in life such as pressing wildflowers and 4 leaf clovers in the pages of her many treasured books or finding and naming interesting rocks, one that especially comes to mind she named the “Bleeding Heart”. Each rock had the dates and places of which they where found attached to them. She loved picking up seashells along the seashore, and collecting clippings of articles out of the newspaper (In Honor of Ann, clip and hang on to this Obit, nothing would tickle her more!). She saved every letter and card that she ever received, she was a sentimentalist in every sense of the word. She always had a lush backyard full of vividly colored snap dragons, beautiful day lilies, begonias and the aroma of her mint and herb garden filled the air next to the steps leading up to her back door.

Ann never had children of her own but she thought of her sister Dorothy’s children Carol Pope ( Robert ) and Ray Butler ( Loretta ) as her own. She also thought of her many nieces and nephews in the same way. Aunt Ann to Teresa Jackson ( Harry ), Steve Pope ( Dana ), Trey Pope ( Page ), Carl Ray Butler ( Daphne ), Sheryl Moffatt ( Schubert ) and all their kids: Tyler, Kirsti and Lauren Jackson, Shelby, Zack and Josh Pope, Parker, Presley Price, Pollyanna Pope, Schubert, Darby, Scout and Rivers Moffatt. She was loving, fun and adventurous but she could also be a firecracker! Everyone from her nieces and nephews to her caretakers at The Rose Garden and Hospice Ministries in Ridgeland could vouch for that!! Life will be very different without our spunky Aunt Ann.

Ann was especially close to Carol Pope (her niece ). They always had a very special bond… to Ann, Carol was like the daughter she never had, that bond remained intact until the very end, and God saw to it that Carol was the one with her as she was called home.

She requested when her time came, to have a graveside service at Rose Hill Cemetery in Sardis, and for the poem,” The Sands of Time”, to be recited. The service will be held on May 10, 2017. In Lieu of flowers donations can be made to her church Broadmoor Baptist in Madison MS or to the charity of your choice. Fellowship following at the home of Loretta Butler

Share Your Memory of
Ann
Upload Your Memory View All Memories
Be the first to upload a memory!
Share A Memory
Send Flowers