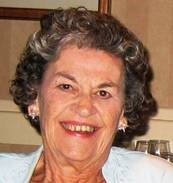 Early Friday morning, August 9, 2019, Anna E. (Betty) Taylor of Ridgeland, MS, went to be with her Lord at the age of 97. She was born on September 19, 1921 in Steubenville, OH. She grew up in Indianapolis, IN and while attending high school she met the love of her life, William M. (Bill) Taylor. She went on to attend Saint Mary-of-the-Woods College in Indiana. She and Bill later married and had 8 children of which seven were girls and one a boy. Before moving to Jackson, MS in 1958 they resided in Indianapolis, IN, Westmont and Haddonfield, NJ, and Essexville, MI.

Betty was a parishioner of St. Richard Catholic Church and a member of St. Monica Circle for many years. Her children attended St. Richard and St. Joseph schools. She also volunteered at St. Dominic Hospital in Jackson.

Family was important to Betty and of course, she loved children. She was an only child and knew from a young age that she wanted to have a large family. She was involved with caring for many of her newborn grandchildren and babysitting as they grew up. Her children meant the world to her. Betty was an avid reader and crossword puzzle enthusiast. She was a strong woman who would "tell it like it is". She had a keen sense of humor and will be missed by many.

In recent years Betty resided at The Waterford in Ridgeland, MS.

We’d like to thank her long-time caregiver, Pat Meeks, who lovingly cared for Betty. The staff at Hospice Ministries were so kind in caring for her these last few months.

Visitation will be at the Natchez Trace Funeral Home in Madison, MS Sunday August 11, 2019 from 5:00pm to 7:00pm and again one hour prior to the chapel funeral service on Monday at 11:00am. Interment will follow in Natchez Trace Memorial Park Cemetery.

In lieu of flowers, donations can be made to Hospice Ministries 450 Towne Center Blvd. Ridgeland, MS 39157.

Share Your Memory of
Anna
Upload Your Memory View All Memories
Be the first to upload a memory!
Share A Memory
Send Flowers