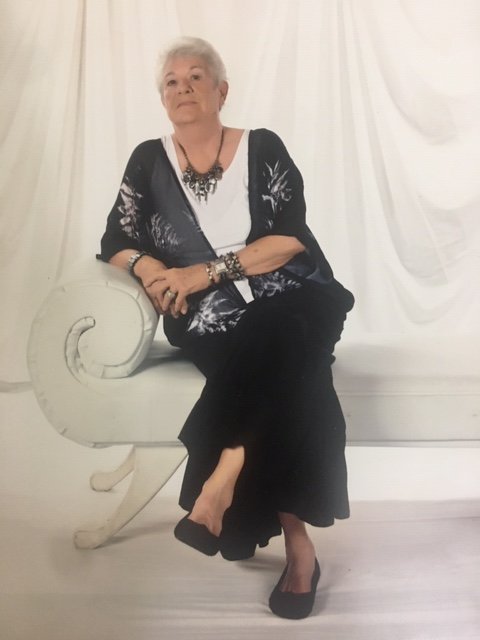 Juanita June Adams, 87 of Ridgeland, MS passed away on Sunday November 3, 2019. She was born on September 4, 1932. She was the second child of Gerald Allen Richardson and Cleo M. Rains Richardson.They later had 6 more children, Gerald, Joanne, Ross, Janice, Don, and Cheryl. She was born in Sunflower County in a tent on a sandbar. She was a little early and only 5 pounds 2 ounces. She used to say she came into the world in a hurry and hungry and she stayed that way.

The family moved from the delta to Choctaw County when she was 4 years old.  Again, she was in a hurry and cried to go to school with her brother. Well, they let her go! She loved school. She used to say that school was easier than staying home. Mama would work your tail off!  She was active in 4H and won a number of ribbons in county fairs. She went to Mississippi State for 3 years for camps in the summer. She was also a state winner and went to Chicago as the state winner. She was an avid basketball player. She won a number of county and district awards in basketball also. She finished high school with honors at the age of 16 in 1949. She was one of the youngest to enroll at Woods Jr. College. She was active in choir, drama club, and on the newspaper staff.

She met and married James Milton Adams on February 7th of 1950.  They had 4 children, James Jr. (Jimmy), Terissa, Susan, and Jeri.  When the kids were growing up they lived in Duncanville, Texas where her husband was a paint contractor. She worked for Kroger as a butcher and she later retired in 1995. While in Texas she was active in having a scout troop and coaching a girls softball team. She loved to bowl and play ball. She divorced in 1979 but remained friends with Andy until he passed away in 1989. She loved to cook and entertain friends. After retiring from Kroger she became a cook at The Bistro and later on at The Crab Shack, which she had a ball doing. She loved to laugh and dance and have a great time. She loved her kids, grandkids, and great grandkids.

She was preceded in death by her brothers Ross and Gerald, her sister Joann,  her son Jimmy and her daughter Terissa. She is survived by her daughters Susan and Jeri, 17 grandchildren, 15 great grandchildren.  She wishes she could see them all grow old but she had to go. She hopes they will remember her with fun and laughter. To all of you she wished to tell you she will see you later. There will be a celebration of life at a later time.

In lieu of flowers, the family has requested donations be made to the Susan G. Komen Breast Cancer Foundation.

To send flowers to the family of Juanita Adams, please visit Tribute Store

Share Your Memory of
Juanita
Upload Your Memory View All Memories
Be the first to upload a memory!
Share A Memory
Send Flowers