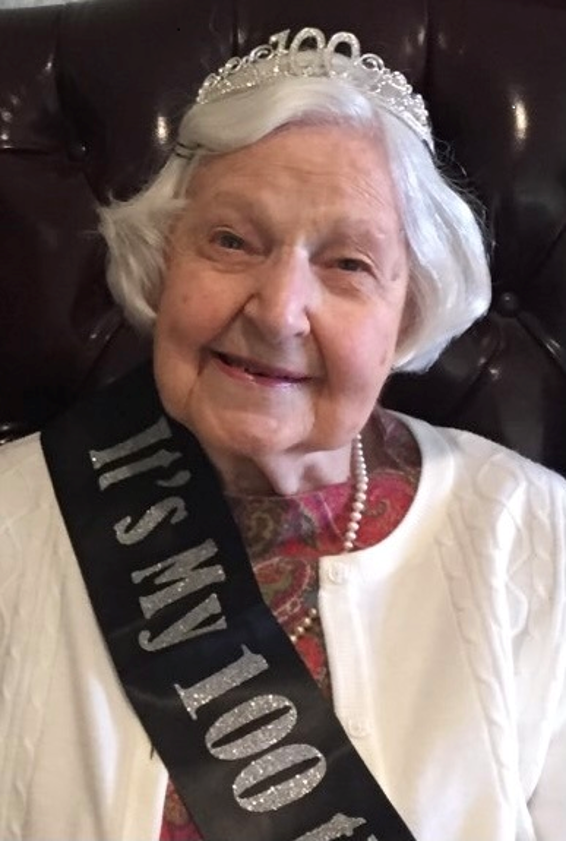 Please share a memory of Pauline to include in a keepsake book for family and friends.
View Tribute Book
Pauline Cerveny Wilson Pauline Cerveny Wilson (Polly), 102, formerly of Wilmington and Newark, DE died Sunday, May 16 at St. Catherine’s Village, Madison, MS, where she lived for nearly 14 years. Her husband of 36 years, H. Blake Wilson died in 1986. She was born a coal miner’s daughter to Eastern European immigrants Alexander and Barbara Cerveny in 1919 in the then company-owned coal mining town of Yatesboro, PA and was raised there and in Richmond, VA, the eldest and last-surviving of nine children. Surviving are: her son, Blake (Ann) of Pasadena, MD (formerly of Mississippi); grandsons Nicholas of Starkville, MS and Andrew of San Antonio, TX; granddaughter Eleanor (Grant) Banks of Brandon, MS; great-grandson Logan Banks and many nieces and nephews and their families. In addition to her parents and husband, she was predeceased by a baby son and eight sisters and brothers, Albert, Mary, Anne, Veronica, Anthony, Ernest, Bernadette and Regina. As one of the ‘greatest generation’ she enlisted in the US Navy WAVES in World War II and upon honorable discharge as a Pharmacist’s Mate Second Class after the war, settled in Wilmington, where she pursued secretarial studies at what was then Goldey Beacom Business School and married her husband. They shared a partnership in family, business and volunteerism, standing up for civil rights in the sixties and running a successful typesetting firm. She also was a bookkeeping assistant at the American Red Cross, Delaware Chapter and in semi-retirement, was a file clerk at the University of Delaware. An active community volunteer, she was a member/officer of the WAVES National, Delaware Chapter (now First State Women Warriors) and a former member/officer with Beta Sigma Phi, Epsilon Chapter and the Women of St. Andrew’s Episcopal Church and various school PTA’s over the years in Wilmington. After settling in retirement in Newark, she also was a former member/volunteer of the Retired Senior Volunteer Program (RSVP) and Newark Senior Center and worked elections at her local polling place. A resilient and positive person, who valued both family and friends, she enthusiastically embraced Mississippi as her new home in 2007 and became an active resident of St. Catherine’s Village, sharing her 100th birthday celebration with 150 of her Mississippi friends. While a resident, she renewed her original Catholic faith and was conferred a Papal Blessing for her centennial by Pope Francis, requested and presented on her birthday by Father Albeenreddy Vatti of St. Francis of Assisi Catholic Church of Madison, where she was a member. Polly’s family is grateful to the staff of St. Catherine’s Village for providing her with a vibrant retirement life filled with activities and friends -- and ultimately attentive and kind nursing care. Funeral and interment will be private. As Polly loved getting flowers, please send an arrangement to someone special in your life.

Share Your Memory of
Pauline
Upload Your Memory View All Memories
Be the first to upload a memory!
Share A Memory
Send Flowers
Plant a Tree