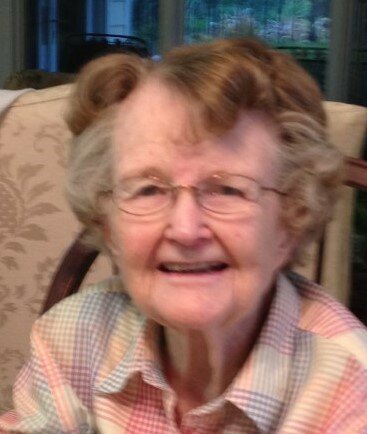 Please share a memory of Mary to include in a keepsake book for family and friends.
View Tribute Book
Mary Phillips Robinson, aged 99, passed away, quietly and peacefully, Sunday night, October 17, 2021, in her own home with her children about her. Mary Frances Phillips was born June 3, 1922, and grew up with two sisters on their parents’ farm just south of the town of Newton, Mississippi. Mary attended East Central Junior College in Decatur, where her unusual aptitude in mathematics drew the support of faculty who encouraged her to pursue further education in Nashville at George Peabody College for Teachers. There she earned a BS and MS in Mathematics, preparing her to embark upon her lifelong calling as a teacher. She began work as a high school teacher in Atlanta and later in Mississippi, but most of her professional career was spent teaching mathematics at Millsaps College and Belhaven College in Jackson. In 1947, Mary married Ralph G. Robinson of Louisville, Mississippi, a Navy veteran of World War II in the Pacific. They lived in Atlanta while Ralph completed his civil engineering education at Georgia Institute of Technology, then returned to Mississippi, eventually settling in Jackson where they reared their four children. Ralph and Mary were raised as Baptists and remained steadfast, active members of that denomination through several church homes, including Woodland Hills, Ridgecrest, and Colonial Heights in Jackson. Both led adult Sunday School classes for many years. Several years after Ralph’s death in 1982, Mary moved to Madison and joined Parkway Hills United Methodist Church where her daughter Phyllis is a member. She tried valiantly to teach the Bible to Methodists for a number of years, until the physical toll of her advancing years compelled her to give up the task. Mary is survived by all of her children: Anice Modesto (Jerry) of Memphis; Stephen Robinson (Judy) of Fort Worth; Phyllis Nowicki (Mike) of Madison; and Letha Robinson of Madison. Mary is also survived by eight grandchildren and one great-grandson. Mary was proceeded in death not only by her husband Ralph and her parents, but also by her siblings Claudia Lovett of Hattiesburg and Lynn McCraney of Meridian. A graveside service will be held at 11AM on Oct 21, 2021. Interment beside the grave of her husband will follow at the Masonic Cemetery in Newton, Mississippi. The family requests that, in lieu of flowers, donations be given to Parkway Hills United Methodist Church, Batson Children’s Hospital, or the charity of your choice.
Thursday
21
October

Share Your Memory of
Mary
Upload Your Memory View All Memories
Be the first to upload a memory!
Share A Memory
Send Flowers
Plant a Tree