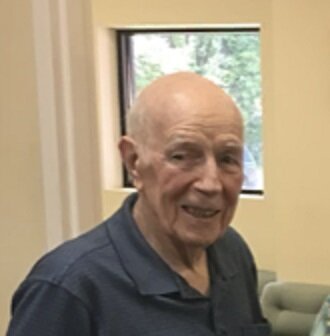 Please share a memory of John to include in a keepsake book for family and friends.
View Tribute Book
John Joseph Leo Shorkey, born in Detroit, Michigan on September 27, 1927, departed his adventurous, loving, and honorable life of faith at the age of 94 on January 7, 2022. John Shorkey was a man determined to live his life as a great example to others. John and his wife Claire lived in faith together for 66 years. Together they raised seven children, traveled the world, had many adventures, and gave rise to a legacy of family and faith. John was born an Irish Catholic to immigrant parents in Detroit, Michigan in 1927. Spending his early childhood in Detroit during the Great Depression, John learned quickly to not only work hard, but to work with everyone, and to work and to live and to serve with great purpose. He found the love of his life at a young age, his faith and conviction as well. There he dedicated his life with Claire. John became a Sergeant in the United States Marine Corps (Paris Island). He attended the University of Detroit’s Engineering program. John began to work for Vickers during his education at U of D, and upon his graduation, was already the proud father of four children with Claire. He continued his adventure with Vickers and built an astonishing career as an aerospace engineer. John’s career at Vickers would take him to great places. He was assigned in 1956 to represent Vickers to Boeing in Seattle, Washington. John worked with Boeing engineers on the KC-97, KC-135, the 707, the B-52, and the Bomarc Pilotless Aircraft, and several other preliminary projects like the Supersonic Transport and Recoverable Booster, which years later became the Space Shuttle. John worked in conjunction with Martin’s Titan II hydraulic group at Cape Canaveral. John later spent four years, with his family, in Mexico starting a branch operation for Vickers Industrial Hydraulics Division. John moved his family to Jackson, Mississippi officially in 1975. He continued his adventurous career traveling often to Paris and Beijing. He worked closely and proudly with his Vickers family until his retirement. John and Claire were proud residents of the City of Madison and were active with their children at St. Richard and St. Joseph and were long-time parishioners of St. Joseph’s Catholic Church. John was devoted to families everywhere of autism, and to Catholic Charities and the Volunteers of Gleaners. John was a great and inspiring father to his seven children. His sense of humor and his intellect and compassion, his sense of duty and service to others generated passion in the hearts of his children and grandchildren. John is predeceased by his beloved Bride of 66 years and his partner in the great journey of life, Claire Therese Monat Shorkey, in whom he placed his faith with seven children, John’s brother Jimmy (Patrick James Shorkey) and his sister June (Irene Cecelia Shorkey) predeceased him, and his parents Joseph Oswald Shorkey and Irene Cecilia Kennedy Shorkey. John is predeceased also by his beloved son-in-law William Felton McNeese and by our great aunt, Yvonne Marie DuPont. John, throughout his life, maintained a presence of devotion, excellence, and peace, seeking to be always a good example for others. John’s example of love, excellence, service, humor, and goodwill is carried by his surviving family. John is survived by his best friend and devoted brother Michael Shorkey and by his many children, grandchildren, and great grandchildren. John and Claire are survived by seven children, John Erin Shorkey, Rev. Kevin Dennis Shorkey, Frank William Shorkey, Mary Therese Shorkey Wade, Julie Ann Shorkey McNeese, Jenifer Marie Shorkey Keslinger, and Kathleen Shorkey Cook. John is survived by his beloved daughters-in-law Francis Devote Shorkey, Shelia Schwartz Shorkey, and Roberta Mehney Shorkey and his beloved sons-in-law John Alex Wade and Rusty Keslinger, his dear friend and co-author. John is survived by grandchildren Kristi Shorkey Shovlin, Becky Shorkey Scott, Kimberly Shorkey Rodriguez, Colleen Shorkey Larkins, Alex Wade, Drew Shorkey (USMC), Nicholas Francis Shorkey, Cory Joseph Shorkey, Ernest Alan Cook, Jr., Madeline Cook Hem, John Kelly Cook, and Thomas Henery Leo Pierce. Great grandchildren abundantly survive John, namely Vanessa, Nathan, Adelaide, Micah, Daniel, Caleb, Kevin, Natalie, and Annabel. Memorials should be made to the Volunteers of Gleaners at 237 Briarwood Drive, Jackson, Ms. 39206 or St. Joseph Catholic Church. Visitation will be Wednesday January 12, 2022 at Natchez Trace Funeral Home from 5:00 pm until 7:00 pm. Visitation on Thursday will be at St. Joseph Catholic Church beginning at 10:00 am on January 13, 2022. The Funeral Mass at St. Joseph Catholic Church will occur at 11:00 a.m. on January 13, 2022 with interment to follow in the church cemetery.
Wednesday
12
January