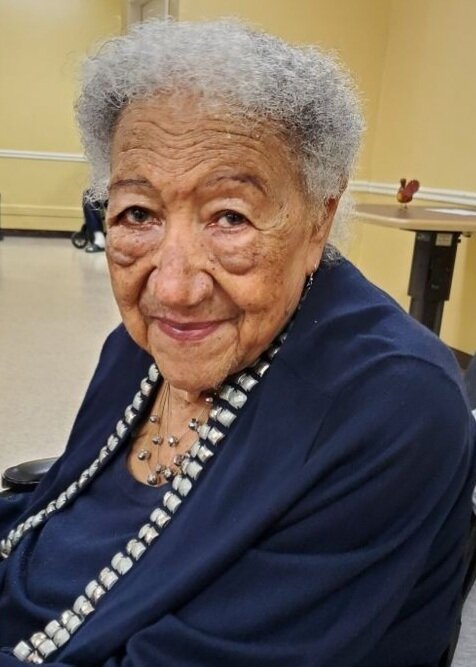 Please share a memory of Mary to include in a keepsake book for family and friends.
View Tribute Book
Mary Jane Crain Hughes was the youngest of three girls, born September 20, 1921, to the parents of Fred Crain and Nancy Barnett in New Edinburg, Arkansas. She went on to Merrill High School Pine Bluff, Arkansas, which she so loved. She often told us life lessons and the great teachings she received at Merrill High. In 1941, mom was one of many called to work when World War II started and was blessed to work at the Pentagon in Washington, DC. It was in July 1945 where she met the love of her life, Mr. Tom R. Hughes, at a busstop in Detroit, Michigan. They married on October 17, 1946. Upon start of their family, mom immediately became actively involved in her local community and church, Saints Andrew & Benedict in Detroit as well as a very active member of many political activities throughout the city of Detroit. Upon retirement, Mary and her husband settled back in the South, retiring in Jackson, Mississippi where they found their niche and became the proud owners of Shaklee Enterprise. Mary and Tom again became very active in their community and church, Holy Family Catholic in Jackson, Mississippi as well as very active politically. In 2007, Mom and dad had the privilege of meeting then Senator Barack Obama who campaigned in Jackson, Mississippi and later overwhelmed with excitement and proud to learn that the Sen. Barack Obama became the first black President of the United States. At the time of her husband’s passing on December 10, 2010, Mary and Tom were married for 64 beautiful years. Now they are “together forever" Mary Hughes passed away January 19, 2022. She was preceded in death by her sisters, Freddie Ray Buckhalter, Eirdie Ellis; and daughter, Betty Grace Harvey and nieces Jaynace English and Rakuyo Champion, and nephew, Carlton Bell. She is survived by her children, Marvin Hughes, Brenda Hughes and Marsha Hughes-Johnson; grandchildren Audrey Williams, Rashelle Williams, Jonina Cobb; David Hughes, Calvin Johnson and Jeremiah Johnson; nieces Yolanda Henderson, Chezelis Byrd, Vin Rose' Buckhalter, and Yvonne Watts, Rhnee English and nephew Charles English; a host of great-grandchildren; great-great grandchildren, great-great-great grandchildren and a host of great-nieces and great-nephews. I’d like to give a special thanks to her great-granddaughter, April Reed, for making mom’s special bracelet for her 100th birthday!
Thursday
27
January

Share Your Memory of
Mary
Upload Your Memory View All Memories
Be the first to upload a memory!
Share A Memory
Send Flowers
Plant a Tree