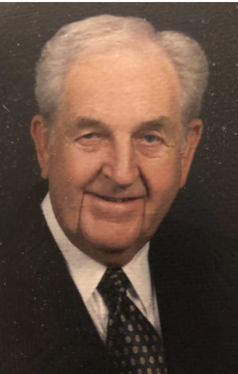 Please share a memory of Thomas to include in a keepsake book for family and friends.
View Tribute Book
Thomas Otto Buckner passed away January 25, 2022 at the age of 96. Mr. Buckner was born September 8, 1925 in Fayette, Alabama. His parents were Thomas Robinson Buckner and Docie Bobo Buckner. He moved with his family to Tupelo, MS in 1936. After his high school graduation he joined the U.S. Marine Corp and served in the South Pacific. Upon returning from the war he started his career with Gulf Oil Corp and continued dating Mary Bean. They were married in 1946. In 1958 they moved to Clarksdale, MS where he purchased the Gulf Oil Distributorship and Mrs. Buckner opened The Fabric Center. In Clarksdale they were active members of Oakurst Baptist Church. In 2002 the Buckners moved to Madison to be near family and joined First Baptist Church of Madison. Mr. Buckner is preceded in death by his parents, Thomas R. Buckner and Docie Bobo Buckner, wife Mary Bean Buckner, daughter Jo Lane Knotts of Batesville, sister Dorothy Buckner Baurenfind of Memphis, TN and great grandson Cannon Rodgers Russell. He is survived by his daughter Jennie Russell (Joe) of Madison, son-in-law Jerry Knotts of Batesville, grandchildren Ken Knotts (Alicia) of Madison, Kacey Neal (Daryl) of Batesville, Katie Maners (Spence) of Nashville, TN, Mary Hunter Hancock (Blann) of Paducah, KY, Ben Russell (Mary Kathryn) of Brandon, and Meg Marlowe (Josh) of Nashville, TN. Mr. Buckner is survived by 12 great grandchildren and one great great grandson. Services will be Friday January 28 at Natchez Trace Funeral Home in Madison. Visitation will be at 1:00 with a service starting at 2:00. Burial will be Saturday January 29 at 12:00 at Lee Memorial Cemetery in Verona, MS. In lieu of flowers, memorials can be sent to First Baptist Church of Madison or Oakurst Baptist Church, Clarksdale, MS.
Friday
28
January

Share Your Memory of
Thomas
Upload Your Memory View All Memories
Be the first to upload a memory!
Share A Memory
Send Flowers
Plant a Tree