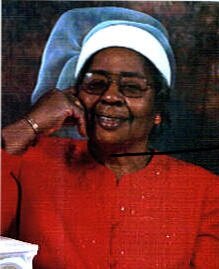 Please share a memory of Ruth to include in a keepsake book for family and friends.
View Tribute Book
FOR THE LORD KNOWETH THE WAY OF THE RIGHTEOUS: BUT THE WAY OF THE UNGODLY SHALL PERISH. PSALM 1:6 Mrs. Ruth Alma Jackson was born on April 5, 1924, to Willie B. McDonald, Sr., and Mary Etta McDonald in Madison, Mississippi. She received her education in both the Madison and Jackson Public School Districts. Ruth accepted Jesus Christ as her personal savior at an early age and became a member of China Grove A.M.E. Church. She served faithfully as President of the Stewardess Board, President of the Pastor’s Aide, Steward, Trustee, Class Leader and Missionary. She did more than just held a position, she knew the importance of praying for others in need and she worked tiredously to fufill her christain duties. Two of her favorite sayings were: “May my last days be my best days” and “It’s God’s way or no way.” Ruth was a dedicated and faithful Christian and the oldest living active serving member of China Grove A.M.E. Church. The third Sunday in January of each year was commemorated as the Ruth Alma Jackson Day. She always smiled no matter what was going on in her life. She made sure we had Bible Study and a review of the Sunday School lesson several days out of a week. This gave her great joy. Ruth was married September 10, 1943 to Johnnie Green Jackson, Sr. This union was blessed with 10 children. She was called home on May 11, 2022 at 7:45 P.M. Ruth leaves to cherish her children: Addie Rutherford, Madison, MS; Johnnie Jackson, Sr., Memphis, Tennessee; Albert Jackson, Sr., (Alice) Clinton, MS; Bettye Edwards (Charles) Madison, MS; Lawrence Jackson, Sr., Jackson, MS; Belvelon Cameron, Madison, MS; Esther Lyles (Otha), Gluckstadt, MS; Lee Jackson, Jackson, MS; 5 siblings: Arcell, Maxine, Earl, Desiree and Wedell. A host of grandchildren, great grandchildren, nieces, nephews, cousins and friends. She was preceded in death by her 2 children; Willie Jackson, Larry Jackson and her parents Willie B and Mary Etta; 7 siblings, Jessie, Columbus, Percy, Willie B., Hollie Joe, Pinkie Lee and Maeola.
Friday
20
May

Share Your Memory of
Ruth
Upload Your Memory View All Memories
Be the first to upload a memory!
Share A Memory
Send Flowers
Plant a Tree