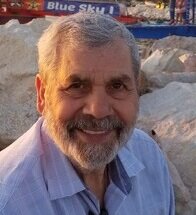 Please share a memory of Vasilios to include in a keepsake book for family and friends.
View Tribute Book
Vasilios “Bill” Nikolis Thassos, Greece. Bill Nikolis,76, passed away on July 28th, 2022. He was born on February 25th 1946 to Matheos and Eleni Nikolis in Theologos, Thassos. As a young boy he worked picking olives in the groves of Thassos, where they were then salt cured into the iconic “Thassitikes” olives. At 17 years old he moved to Kavala, Greece and joined the Navy. After his discharge he found work as a merchant marine. He sailed all over the world to places like India, China and Argentina. In 1970, he settled in New York City where he was blessed with his first two children Mathew and Eleni Nikolis from former spouse Judy Brooks. Bill, while vacationing on his home island of Thassos met Anastasia “Soula” Nilkolis who was widowed with her two children Steve and Pete Efstratiou. Bill and Soula were married and moved to Jackson, MS in March 15th 1983 on Soula’s Birthday. They later moved to Memphis, TN where they were blessed with another son, Nick Nikolis. Bill eventuallty settled down in Madison, MS where, with his wife Soula, he opened a Greek restaurant, Vasilios, in 1994. Prior to going into the restaurant business he worked as a painting contractor for 25 years. Bill loved serving customers recipes from his native Greece for nearly 30 years. He enjoyed fishing and loved spending time in the open water. He was a loving husband, father, grandfather and friend. He left a lasting impression on those he met. He will be missed and may his memory be forever eternal. Vasilios “Bill” Nikolis is survived by his wife Anastasia “Soula” Nikolis, brother Yiorgos, sister Sophia and children Mathew Nikolis(Leanna), Eleni Nikolis, Steve Efstratiou(Stephanie) and Pete Efstratiou(Laura), his eleven grandchildren and two great granchildren. He is preceded in passing by his parents Matheos and Eleni Nikolis, sister Maria and son Nick Nikolis. Visitation is Wednesday August 10, 2022 at Holy Trinity - St. John Theologian in Jackson, MS from 10:00am until 11:00 with the funeral service at 11:00am. The graveside service will follow at Natchez Trace Memorial Park Cemetery at 12:30 with the Mercy Meal at Natchez Trace Funeral Home from 1:00-2:00pm.
Wednesday
10
August

Share Your Memory of
Vasilios
Upload Your Memory View All Memories
Be the first to upload a memory!
Share A Memory
Send Flowers
Plant a Tree