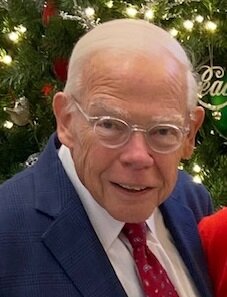 Please share a memory of James to include in a keepsake book for family and friends.
View Tribute Book
James Alford Lilly “Huston” passed away at his home on September 15, 2022. He was born to Thomas Jackson Lilly, Jr. “Tite” and Margaret Sample Lilly on January 15, 1944. Huston spent his childhood hunting and fishing in Pontotoc, MS. When he was a junior in high school, his family moved to Jackson, MS where Huston graduated from Murrah High School. He attended Hinds Junior College and then graduated from the University of Southern Mississippi. He was a member of Sigma Alpha Epsilon fraternity at USM where he made life-long friendships. After graduating from college and a temporary job teaching school, he joined the United States Air Force and after basic training was sent to Vietnam. After completing his military service, he was employed by the Mississippi Employment Security Commission in Laurel, Jackson, and Canton, MS. After retiring from MESC, he worked for Joseph A. Bank Clothiers before finally retiring for good to stay at home and piddle with his yard and his dogs. Huston was a member of First Baptist Madison where he was a former deacon and served as a greeter. Huston was preceded in death by his parents. Survivors include his wife, Jeanine, daughter Anna Claire Lilly (Drew Ziegler), brother Thomas Jackson Lilly III “Tom”, sister Cheryl Simmons (Larry) and sister-in-law, Anita Lilly, along with his nieces Candace Adams (Shane), Sarah Lilly, Kathryn Usry, and nephew Will Simmons. Great-nieces include Morgan Bedford, Lauren Adams, and Hannah Adams; and great-nephews include Noah Adams, Josh Adams, Cade Usry, and Tate Usry. He is also survived by Jeanine’s brothers Rusty Berry (Lori) and family and Jeff Berry (Tracy) and family. Huston was a “people person” who truly never met a stranger. He loved his family and Jeanine’s family, he loved his friends and his dogs, he loved football and Ole Miss, he loved bagpipes and bluegrass, he loved clothes, and he loved bargains. Visitation will be held at First Baptist Madison on Wednesday, September 21, from 11am – 1pm. A private family service will be held at a later date. Huston will be buried in Pilgrim’s Rest Baptist Church cemetery in Copiah County where Jeanine’s mother, aunt, and grandparents are buried. In lieu of flowers, memorials may be made to Hospice Ministries 450 Towne Center Blvd Ridgeland, MS 39157 or to First Baptist Madison 2100 Main Street Madison, MS 39110.
Wednesday
21
September