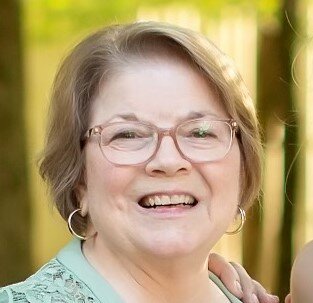 Please share a memory of Judy to include in a keepsake book for family and friends.
View Tribute Book
Judy Carolyn Smith Jones, 78, of Madison, MS, died on December 2, 2022 after a brief battle with leukemia. Judy was the beloved bride of Douglas Jones for 58 years. Judy was born in Senath, MO to the late Maude and John Smith as one of thirteen children. Judy attended Arbyrd High School where she played basketball and was a cheerleader. Shortly after high school graduation, Judy moved to Philadelphia, PA and then Memphis, TN. Through mutual friends in Memphis, she met Doug on a blind date to an all-night gospel sing. They married in Memphis and were active at Broadway Baptist Church in the young married couples ministry. After five years in Memphis, Judy and Doug moved to Greenville briefly, then settled in Brandon. In Brandon, they reared their two children, Keith Jones and Sarah Jones Skelton. Judy was active at Crossgates Baptist Church for years, singing in the choir and teaching the three year olds Sunday School class. She worked as a legal secretary for a local law firm, retiring when her grandchildren were born. Doug and Judy moved to Madison in 1996 and joined Highland Colony Baptist Church where she was active in the Greenhill’s Sunday School class and the choir. Judy was a consummate mother and grandmother, attending countless school and church performances and sporting events. She is survived by her husband, Doug, her two children Keith Jones of Canton, GA, Sarah (Jeff) Skelton of Jackson, four grandchildren who brought her so much joy, Wilkes (Melina) Skelton of Jackson, Rhodes (Haley) Skelton of Madison, Sarah Helen (Jack) VanDevender of Columbia, SC, and Harrison Jones of Canton, GA and two great granddaughters, May Skelton and Cile Skelton. She is also survived by four siblings, Don Smith of Largo, FL, Barbara Creasy of Godfrey, IL, Sally Grimes of Crystal City, MO and Mel Smith of Collinsville, IL. She is preceded in death by her brothers, Robert Smith, Joe Smith, Charles Smith, and Teddy Smith, and sisters Dorothy Whitlock, Alma Jean (Gal) Smith, Rose McCourt and Betty Vogel. Visitation will take place at Highland Colony Baptist Church on Monday, December 5, 2022 at 9:30 am with a worship service following at 11:00 am. Graveside will follow at Natchez Trace Memorial Park Cemetery. In lieu of flowers, charitable donations may be made to Highland Colony Baptist Church, 1200 Highland Colony Parkway, Ridgeland, MS 39157 or MadCAAP, 181 Watford Parkway Drive, Canton, MS 39046.
Monday
5
December

Share Your Memory of
Judy
Upload Your Memory View All Memories
Be the first to upload a memory!
Share A Memory
Send Flowers
Plant a Tree