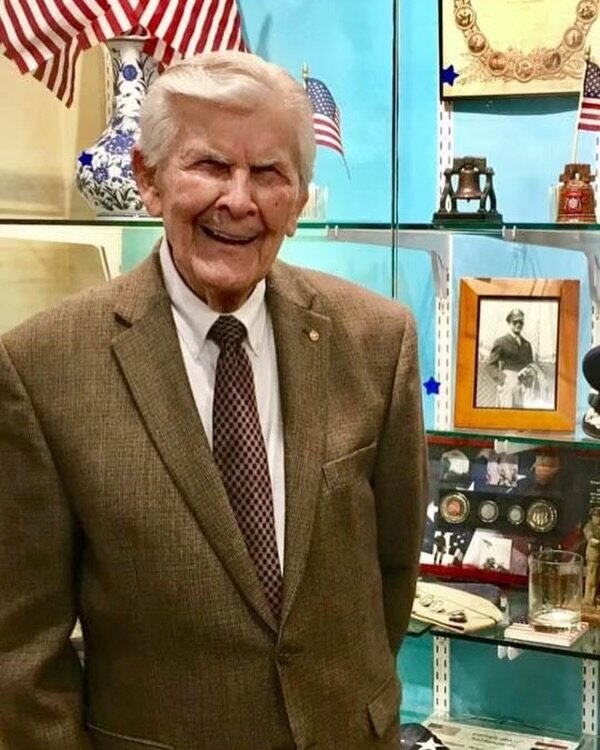 Please share a memory of John "Jack" to include in a keepsake book for family and friends.
View Tribute Book
Colonel John Ewing Buchanan (Jack), Retired USAF, age 98, passed away on May 29, 2022 in Jackson, Mississippi. He was born on July 27, 1923 to Fountain Hughes and Lillian Gibson Buchanan in Vicksburg, MS.. He enlisted in the Army Air Corps, December 1942 at 19 years old. Prior to enlisting he completed one and a half years of study in Civil Engineering at Mississippi State College. He received his pilot’s wings at Craig Field, Alabama in May of 1944 (21 yrs. Old) and was commissioned a Second Lieutenant in the Army Air Corps. He was also a pilot instructor at Craig Field during which time he completed several concentrated fighter flying courses of basic and advanced fighter training in the P-40 and P-47. During WWII he flew the P-40, P-47, P-51 and the AT-6. After being released from active duty in September of 1945 (23 yrs. old), he returned to MS State and graduated in May 1949 with a BS degree in Bachelor of Science from the school of Business and Industry, majoring in Aviation Operations and Management. After graduation, he was accepted for an executive training program with Sears, Roebuck, and Company, in Jackson, MS. Six months later he accepted the position of District Manager with Gulf Area Builders Supply Company, Incorporated of Montgomery, Alabama. In August of 1950 he was recalled to active duty in the USAF and assigned to James Connally AFB, TX as a Pilot-Instructor. In February 1951 he was selected to attend the Statistical Services Officer Course at Lowry AFB, Colorado. Upon completion, he continued in Statistical Services assignments until December 1954, including an overseas tour with Headquarters, Twentieth Air Force at Kadena AB, Okinawa, in the Combat Reporting Division from 1951 through 1953. Following his overseas tour, he was Management Analysis Officer at Headquarters, Western Air Defense Force, Hamilton AFB, California, until January 1956, He then completed the Advanced Flying Interceptor course at Tyndall AFB, Florida, and in August 1956 was assigned to the 322nd Fighter Interceptor Squadron, Larson AFB, Washington; he flew the F-86D-L aircraft. In October 1958, during the Formosa Crisis, he was selected for another tour of duty on Okinawa at Naha AB with the 25th Fighter Interceptor Squadron. The squadron was in-activated and most of the overseas tour was spent as Chief, Operations and Training Division, for the 51st Fighter Interceptor Wing. In 1961 and 1962 he attended Air Command and Staff College at Maxwell AFB, Alabama. Following completion of the Staff College courses, four years were spent at Headquarters, United Stated Air Force, Washington, DC, as Chief of the Air Operations Branch of the 1035th USAF Field Activities Group (Air Force Technical Applications Center), Deputy Chief of Staff/Plans and Operations. In June of 1966 he attended the USAF Advanced Flying Tactical Reconnaissance Course in RF-4C aircraft at Shaw AFB, South Carolina. Upon completion of the reconnaissance course, he was assigned to the 10th Tactical Reconnaissance Wing, RAF Alconbury, England, as Commander of the 1st Tactical Reconnaissance Squadron and held the position for three years. In September of 1969 he was assigned to Udorn RTAFB, Thailand. While there he flew 50 combat missions in RF-4C and C130 aircraft for a total of 305 combat hours. In May of 1970 he was assigned as Assistant Chief, Command and Control Division, Deputy Chief of Staff/Operations, Headquarters Seventh Air Force, Tan Son Nhut AB, Vietnam (PACAP). After completion of the Southeast Asia assignment he returned to the US in September of 1970 as a full Colonel. He resumed duties as Chief of the Plans and Programs Division, 1035th USAF Field Activities Group (Air Force Technical Applications Center), Alexandria, Virginia in October of 1970. He was a Command Pilot and had over 5,000 hours of flying time, including 2,500 hours of jet aircraft flying time. (Definition of command pilot: U.S. Air Force pilot who has had at least 3000 hours in the air and not less than 15 years flying service.) His military decorations include: The Bronze Star Medal with one Oak Leaf Cluster, Air Medal with one Oak Leaf Cluster, Air Force Commendation Medal, Air Force Commendation Medal, Army Commendation Medal, Air Force Outstanding Unit Award with 3 Oak Leaf Clusters, Combat Readiness Medal, Army Good Conduct Medal, American Defense Service Medal, American Campaign Medal, World War II Victory Medal, Army of Occupation Medal, National Defense Medal, Korean Service Medal, Vietnam Service Medal with one Bronze Service Star, Air Force Longevity Service Award Ribbon with four Oak Leaf Clusters, Armed Forces Reserve Medal, Small Arms Expert Marksmanship Ribbon, United Nations Service Medal, and Republic of Vietnam Campaign Medal. He retired from the Air Force in 1973 and opened one of Jackson’s finest Antique Shops: Antiques Et Cetera, Highland Village. He retired from this business in 1990 after 15 years. Subsequently he moved to Tucson, AZ and spent 20 years in what he called his “Shangri La”. In 2017 he moved back to MS to be near his girls and took up residency at St. Catherines Village in Madison, MS. Jack was married to the former Ann Wailes of Vicksburg, MS. They have two daughters, Ann Wailes Buchanan of Madison, MS and Pamela Buchanan Ball of Jackson, MS. Two grandsons, James Curtis “Trey” Ball, III, Wesley Buchanan (Hillary) Ball; Two great granddaughters, Vera Katherine Ball, Chloe Lynn Ball. One niece, Lucille (Lucy) Flohr of Dallas, TX.; One nephew, Fountain Hughes (FH) Buchanan of Metairie, LA. A very special friend and companion, Robbie Hughes of Madison, MS. Inurnment & military services celebrating his life will be at a later date in the Arlington National Cemetery in Arlington, VA. In lieu of flowers, memorial gifts may be made to the Tunnel to Towers Foundation, 2361 Hylan Blvd. Staten Island, New York 10306. Memorial Services will be held Friday June 3, 2022 at 4 P.M. at The Chapel at St. Catherine’s Village, 200 Dominican Drive  Madison, MS 39110.
Friday
3
June

Share Your Memory of
John "Jack"
Upload Your Memory View All Memories
Be the first to upload a memory!
Share A Memory
Send Flowers
Plant a Tree